The following photos appeared in a 2020 NH DOT report that described the condition of the Route 28 bridge over the Suncook River. This is at the northern border with Pembroke. 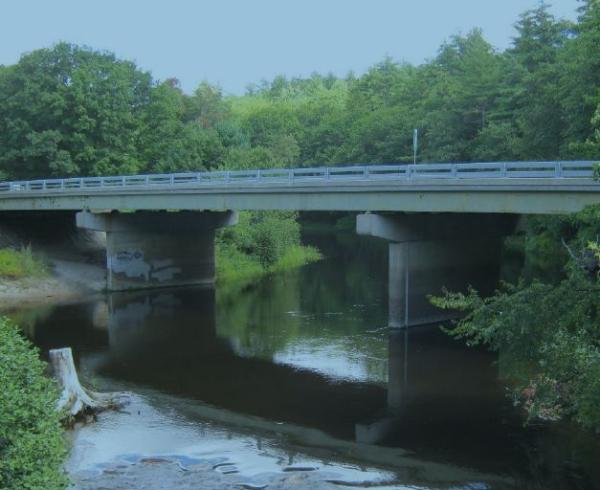 View of Route 28 bridge from upstream

Starting May 2nd (according to the flashing signs on the side of the road), major work is to begin on the Route 28 bridge over the Suncook River, about three miles north of the downtown area.

Based on hearings held with Allenstown and Pembroke residents, half of the bridge is to be reconstructed this year between May and October and the other half next year. This will limit movement across the bridge by the use of traffic lights to control alternating one-way travel. The alternative plan was to close and rebuild the entire bridge for a year, which both towns turned down. This is definitely a project that is going to have a regional impact.

Traffic is expected to be backed up on Route 28 during the morning and afternoon commute hours, and on weekends when people travel to and from the lakes and mountains. The only alternate route northbound is via Glass St. (cross the lower level of the Route 3 double decker bridge and turn right), then go north to Buck St. and Route 28. For southbound traffic, just before the bridge, take a right onto Buck St. and go south to Glass St. and then left across the double decker bridge to Route 3 north or south.

In a 2021 Red List of NH state-owned bridges, the entry for the Route 28 bridge showed that it was built in 1958 and added to the Red List in 2013. Its current priority is 46 out of 114 bridges needing repairs. Its condition was noted as "Deck 4 Poor, Superstructure 5 Fair, Substructure 6 Satisfactory." The numbers conform to the National Bridge Inspection Standards (NBIS). It is a positive sign that the number of red-listed bridges in the state has dropped from a high of 143 in 2016.

The following description of the work to be done was lifted from a report on a Pre-Construction Video Conference held on Tuesday, March 8, 2022. This meeting was attended by NH DOT personnel, NH DES personnel, Allenstown and Pembroke officials, and agents from Evroks Corp. and Severino Trucking.

"The scope of the road work consists of reconstructing the approaches and installing approach rail and end units.

"Work is anticipated to start at the end of April. Work will begin with setting up the state trailer and building a crane pad for Phase 1 work.

"Phase 1 construction will begin on May 6, 2022. The schedule shows meeting intermediate completion date of October 28, 2022. May 9, 2022 is the day anticipated for shifting traffic into temporary signalized alternating one way to construct Phase 1. The schedule anticipates the project to be in phase 1A for winter maintenance as dictated by the prosecution of work.

"Phase 2 is planned to start April 2023. Bridge work anticipated to be complete October 13, 2023, to give subcontractor Severino three weeks to complete road work.

"August 2022 is the anticipated timeframe for starting the pier collar work that involves impacting the river. The thought being that in August the river will be in a low flow condition which will make constructing the access and cofferdams2 for the pier work easier.

"The construction for the piers themselves is planned to start in October 2022 after the bridge work above from Phase 1 is complete. These dates could fluctuate depending on what the water level in the river is doing at that time. Evroks would like to leave the pier access and cofferdams in place until the Phase 2 steel is removed in the following spring. This will allow Severino to have more overhead room for the excavator during access and cofferdam removal."

Definitions:
1 Scour Protection - Measures to prevent loss of riverbed sediment around bases of bridge piers due to water flow. Measures can include the use of bagged solutions filled with grout or other material, protective aprons, mattresses, flow energy dissipation devices and rock and gravel burial;

2 Cofferdam - An enclosure built within a body of water. The enclosed volume is pumped out, creating a dry environment so that the work can be performed safely. Cofferdams are commonly used for construction or repair of structures built within water like permanent dams, oil platforms, and bridge piers.

Grin and bear it! (Just kidding.)

You have these choices.